Can a congress be sustainable? 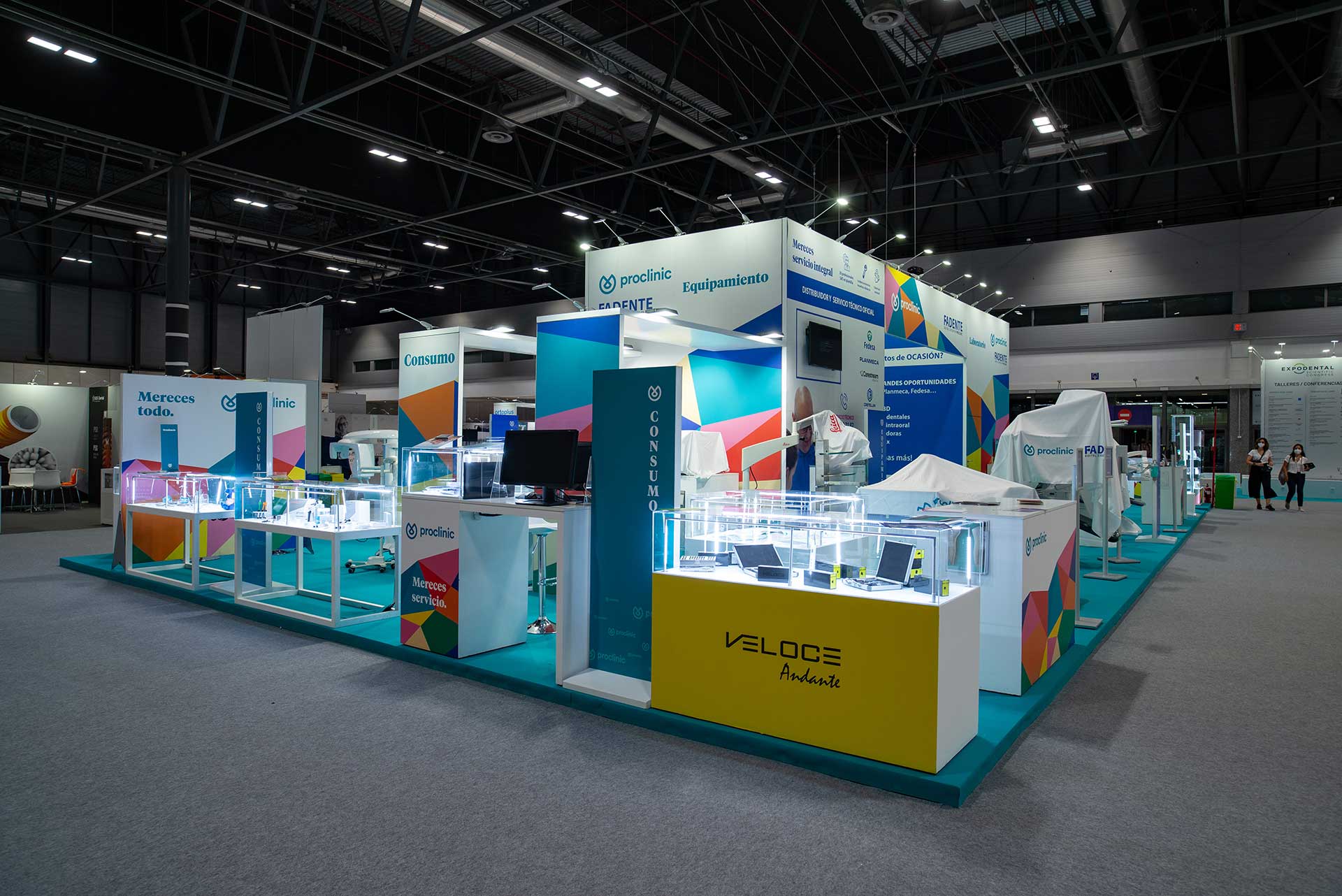 CLIENT: IFEMA The answer is yes. Expodental Scientific Congress 2021, held from June 24 to 26 at IFEMA, became the first congress to achieve the certification of a sustainable production event issued by Eventsost. An initiative that started from 4foreverything, awarded by IFEMA for the design and total production of this event. To do this, 4foreverything deployed a sustainability strategy that included the incorporation of an action plan in order to mitigate the effects on the environment, promote the circular economy and reduce the carbon footprint generated by the congress. As a fundamental measure, the entire production of the congress and the exhibition area, which represented more than 3,000 m2, was carried out with the use of Aluvision, the 100% sustainable modular system and certified as a Sustainable Resource for events by Eventsost, thanks to its ability to be reusable and its contributions to circularity in events. In this way, it collaborated in the promotion of the circular economy avoiding the production of waste and the consumption of virgin materials and favoring reuse and recycling. This intervention was accompanied by other measures such as the use of recycled carpet, the use of recycled canvas to cover the modular structures, the printing of all materials in latex inks, with zero generation of waste and zero toxicity, and the use of wheelbarrows. electric lifts for assembly, among others. As a complement to this action, the carbon footprint generated by the event’s production was offset through the Plant-for-the-Planet Spain Foundation. A reforestation (of 20 trees) carried out in the Yucatan peninsula and an environmental and climate education activity aimed at young people between 10 and 16 years of age were the interventions carried out. 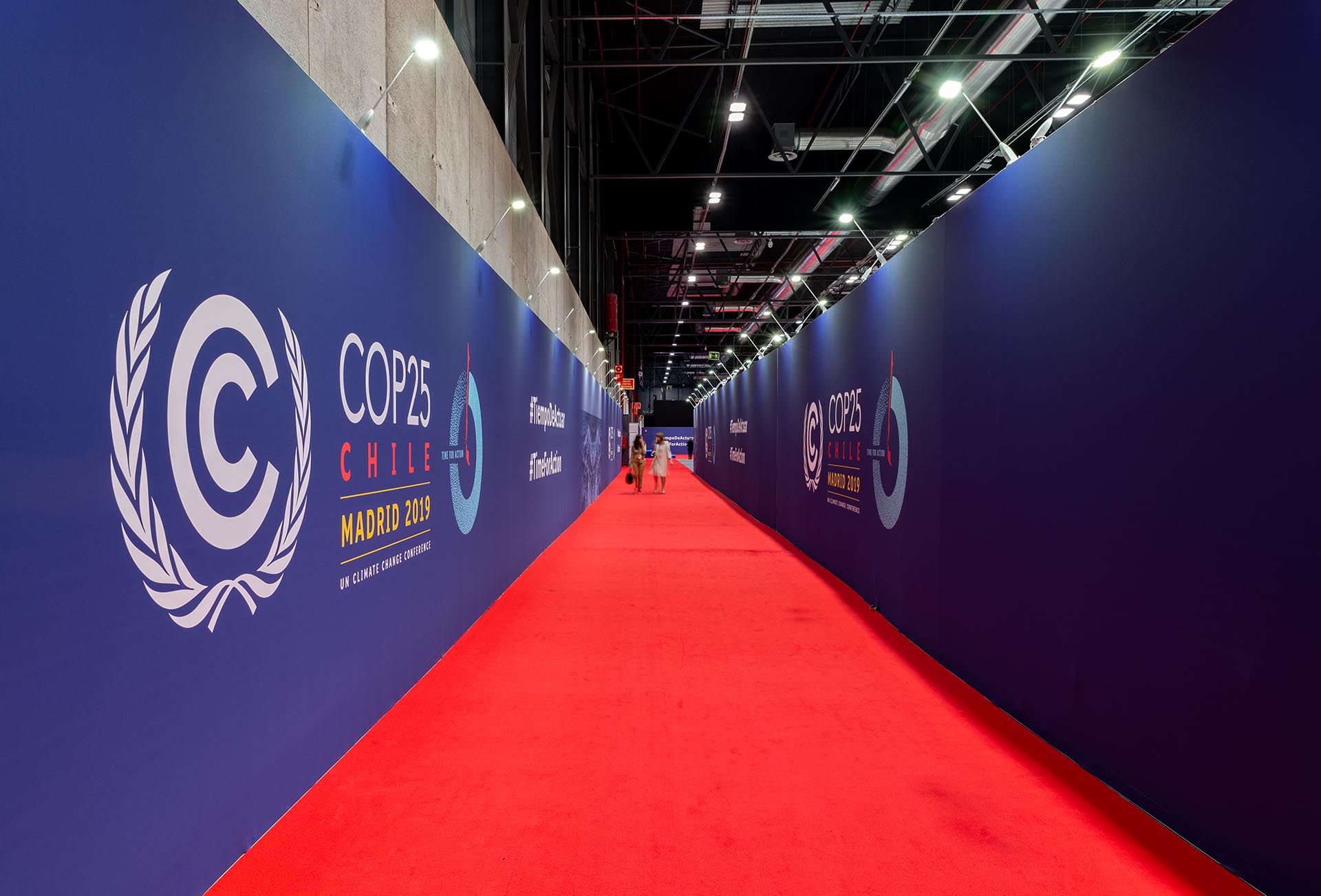 The Climate Summit: everyone was watching us. “Hemos recibido un reconocimiento unánime no solo por parte de Naciones Unidas y el Gobierno de España, sino por el conjunto de la sociedad española y la comunidad internacional.”Eduardo López-Puertas Bitaubé.Director General de Ifema CLIENT: IFEMA 4foreverything was one of the three firms selected by IFEMA for one of the biggest organisational challenges of 2019; the change of venue of the COP 25 climate summit from Santiago de Chile to Madrid with just one month’s notice. We had only a week and a half to get the plans ready and the project approved. We worked against the clock on the design and production of two halls covering more than 5,000 m2: the UN staff office (300 m2), the media centre (4,200 m2 for print, digital and broadcast press), the VIP room, board rooms and the Government and UN offices. Plus we designed all the décor of the Red Area (VIP access for the authorities to the photocall and grandstand) and the handshake area for the authorities. In record time and with an inescapable obligation: all materials and processes had to be sustainable, a requirement 4foreverything has been geared up to meet for some time. We used our exclusive Aluvision assembly system which is fully reusable, easier to store and lighter, thus cutting down on transport and emissions.  The graphics were printed with latex ink, which is chemical-free and cleaner than conventional ink. The assembly was performed with electric forklifts. The team of designers, project managers, assemblers and coordinators were available fulltime, adapting to the needs of a highly demanding customer such as the UN and coordinating with an international team with which we held daily follow-up meetings and sorted out last minute changes. We strive to help build brands and this time we have helped the most important one: the Spain brand. 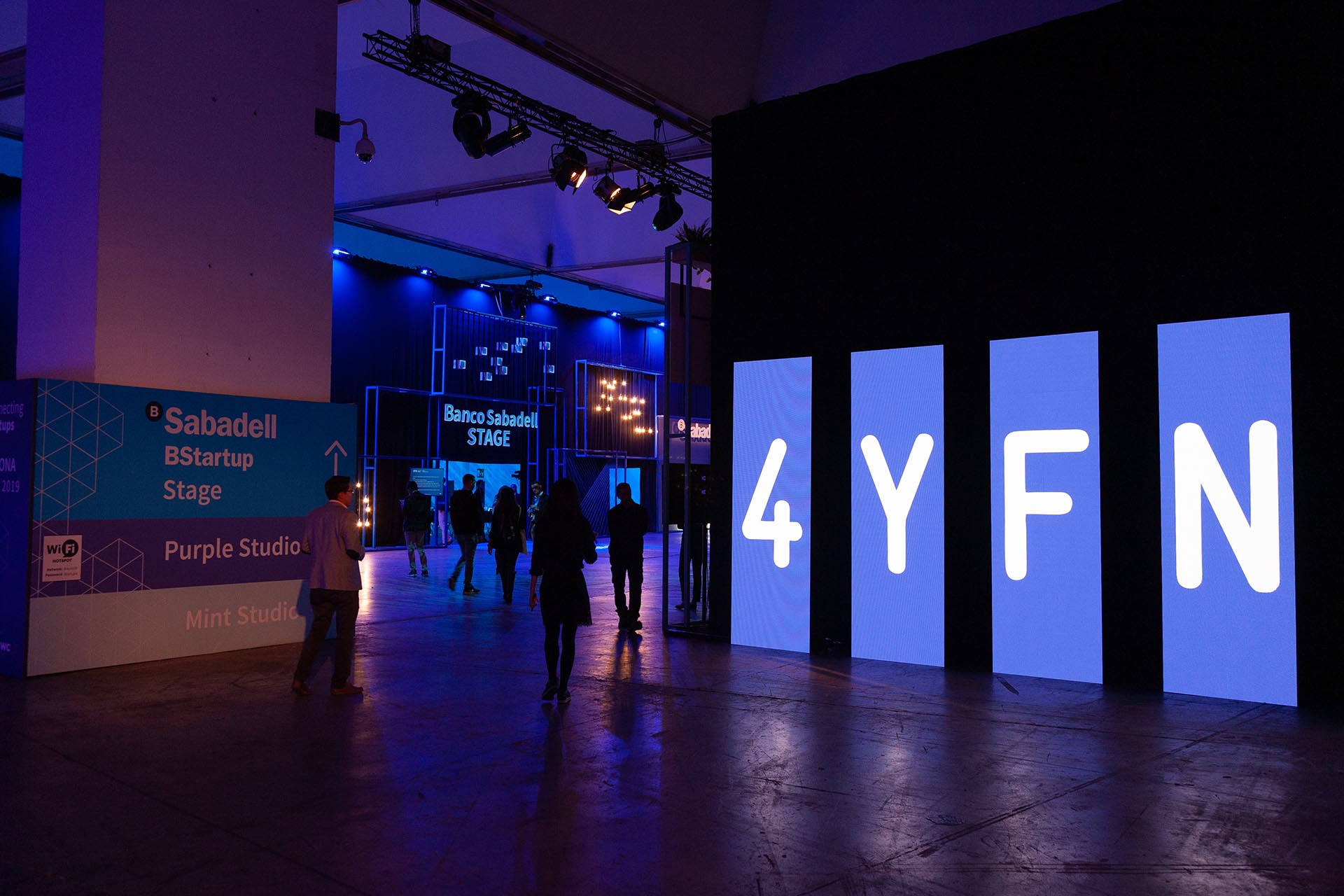 Congress for startups has to feature innovative ideas CLIENT: FIRA BARCELONA Every year 4FYN is run as part of the Mobile World Congress. It is an international exhibition and activities platform for startups. 4foreverything won the pitch for the integrated management and complete production of 4YFN, totally revamping the concept and overall design of the exhibition. The 14,000 m2 at Montjuïc’s Hall 8 were restyled to present a more consistent image of the innovative world of startups. All the areas for the 500 exhibitors were built featuring 17 special booths. Four auditoriums were set up for 150 to 500 people: Sabadell Auditorium (500 pax), Garden Stage (300 pax), Agora Stage (150 pax) and Summit Stage (100 pax), all fitted out with audiovisual, scenery and decoration facilities. We installed three meeting rooms and an 800 m2 venue in the Discovery area, which hosted a presentation area, a common area and the Investor area.  Barcelona MWC now has a world-class exhibition for startups. 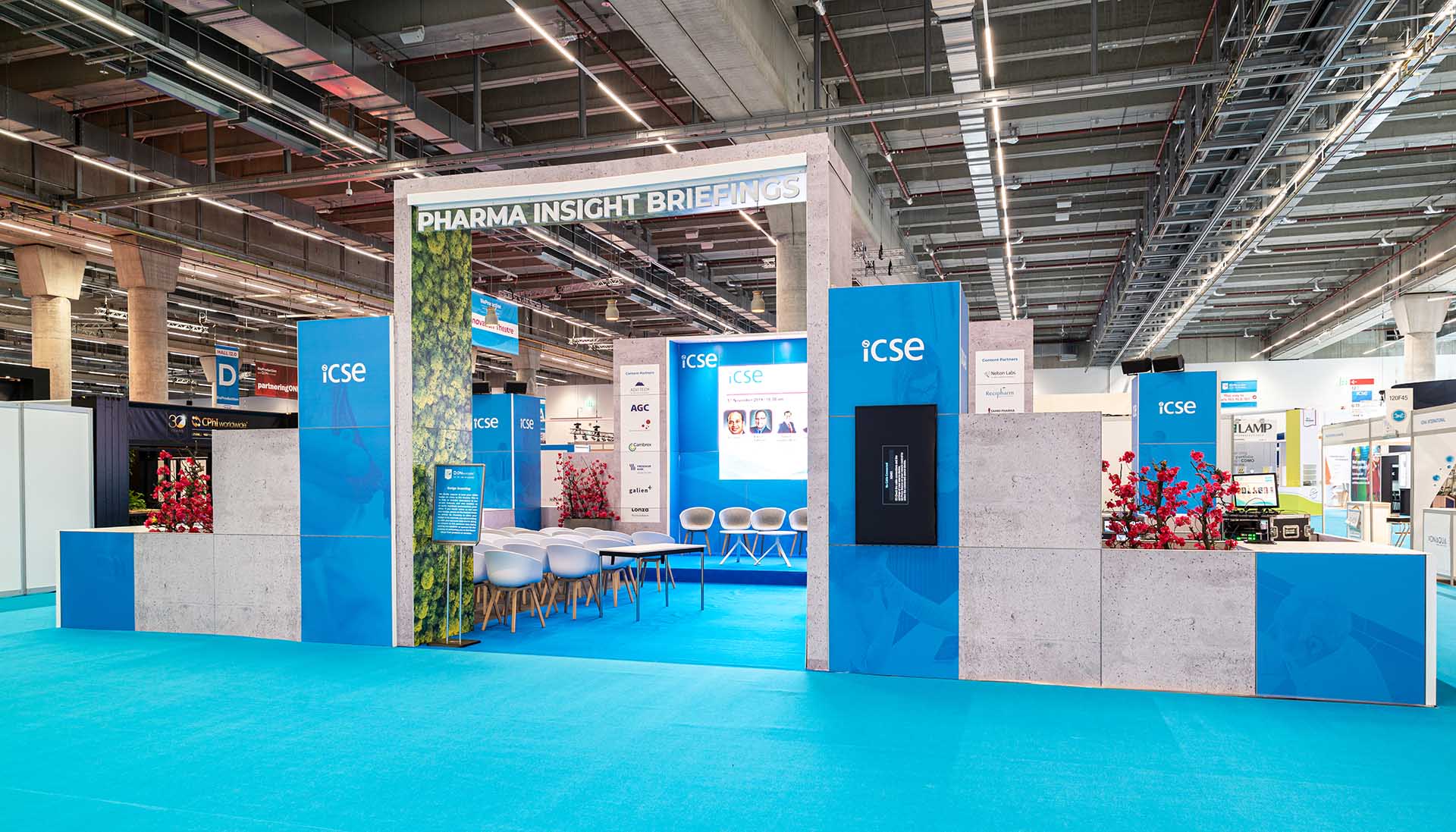 THE WORLD’S PREEMINENT PHARMACEUTICAL FAIR CHOOSES US TO AVOID HEADACHES. CLIENT: GES CPhI is one of the premier global events for the pharmaceutical industry and every year it is run in a different city. Since 2015 4foreverything has been involved in each edition. In 2019, the fair was held at Messe Frankfurt where we set up 50 premium designer booths and more than 4,500 m2 of exhibition area divided into several halls and over a number of floors in just four days. Over 80 people including project managers, assemblers, audiovisual personnel, sign makers, painters, electricians and graphic designers came to Frankfurt. This small organisation used more than 19 trailers for assembly and disassembly plus two additional trucks and nine people for in-house logistics. These dimensions are the measure of the capability of a company at one of the world’s largest trade fairs. It is no surprise that every year CPhI chooses us, anywhere in the world. 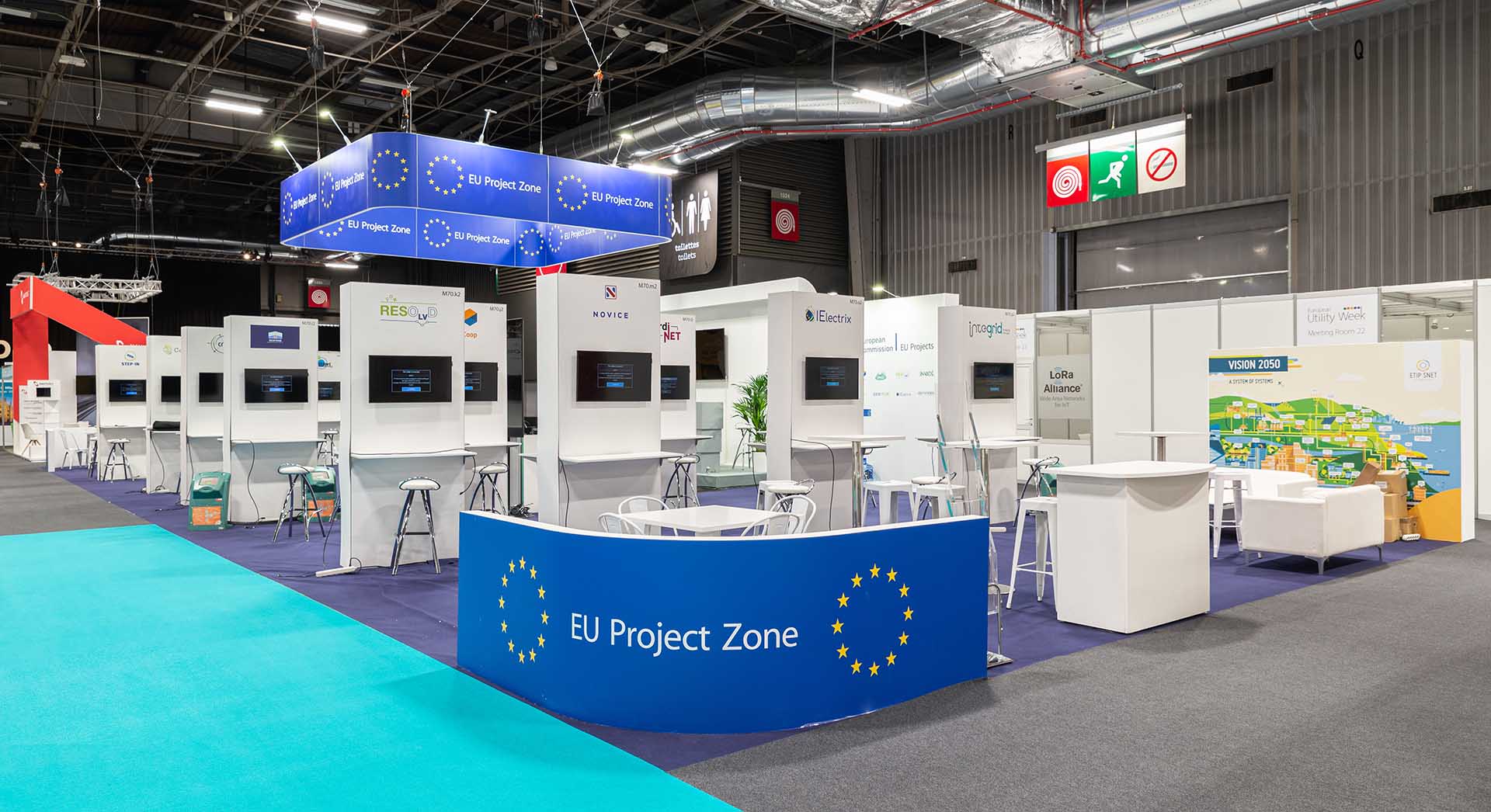 CLIENT: GES Design and construction of over 50 booths and nine common areas at the leading pharmaceutical fair CPhI. 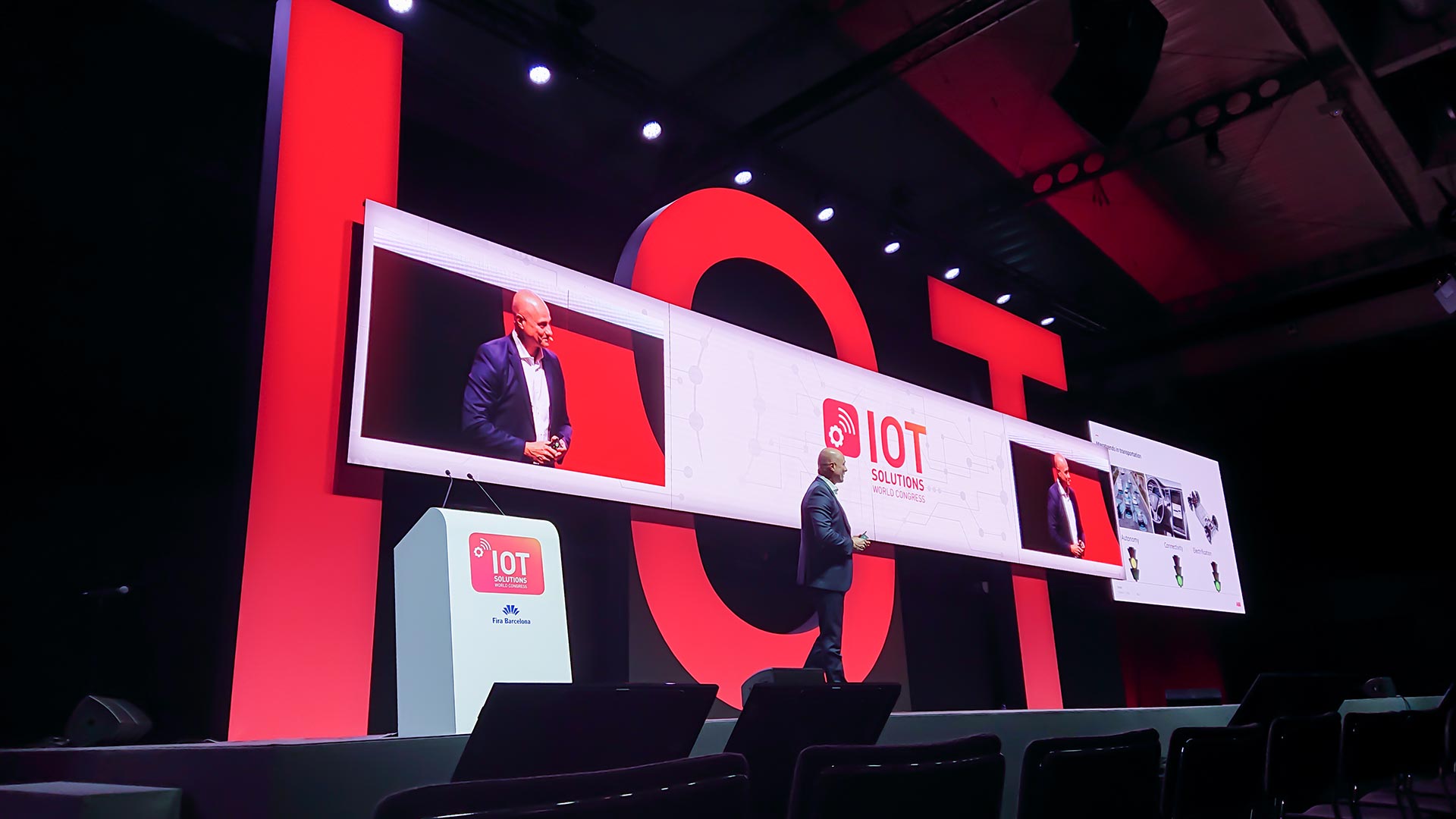 CLIENT: FIRA OF BARCELONA Design and construction of more than 3,000 m2 set up for auditoriums, theatres, rest areas and booths as part of the Internet of Things congress as well as a gala dinner held in the Montjuïc hall for more than 1,200 people. 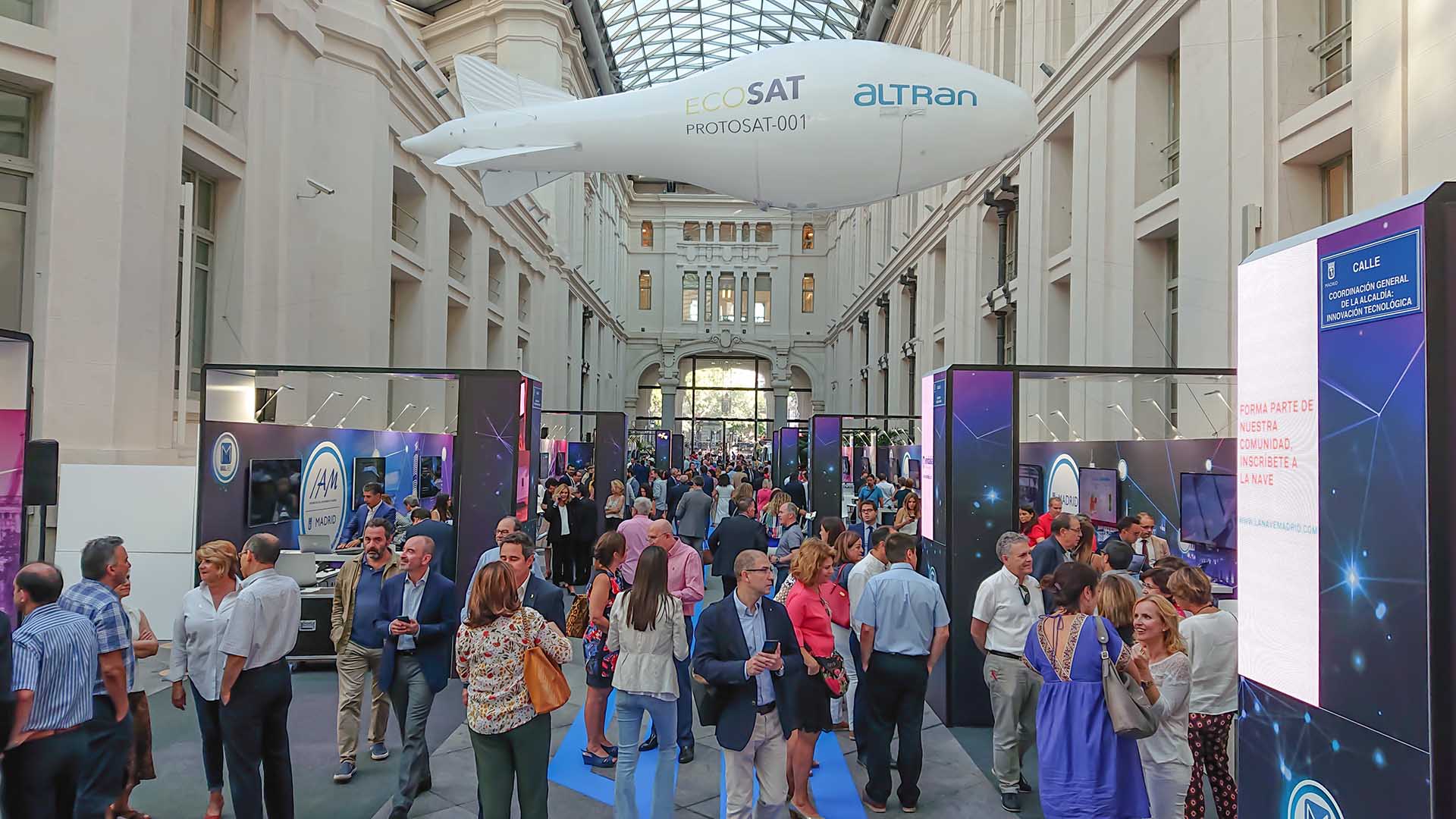 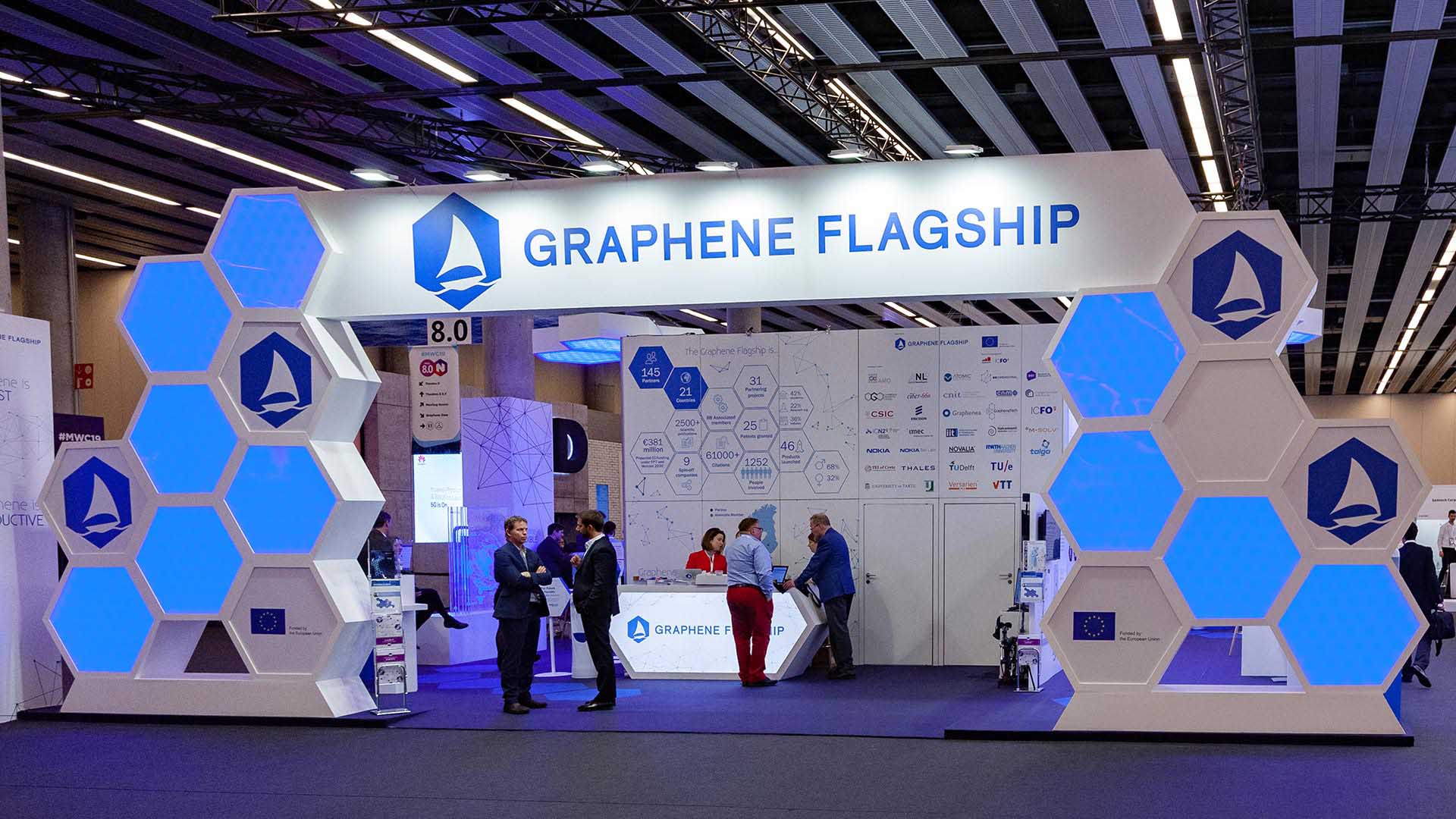 CLIENT: FIRA OF BARCELONA Building the access areas for accreditation, common areas, meeting rooms and lounge area for the MWC at Fira de Barcelona for the fourth year in a row. The project included making designer booths for several firms including Kochava, Graphene and Catalonia Drones. 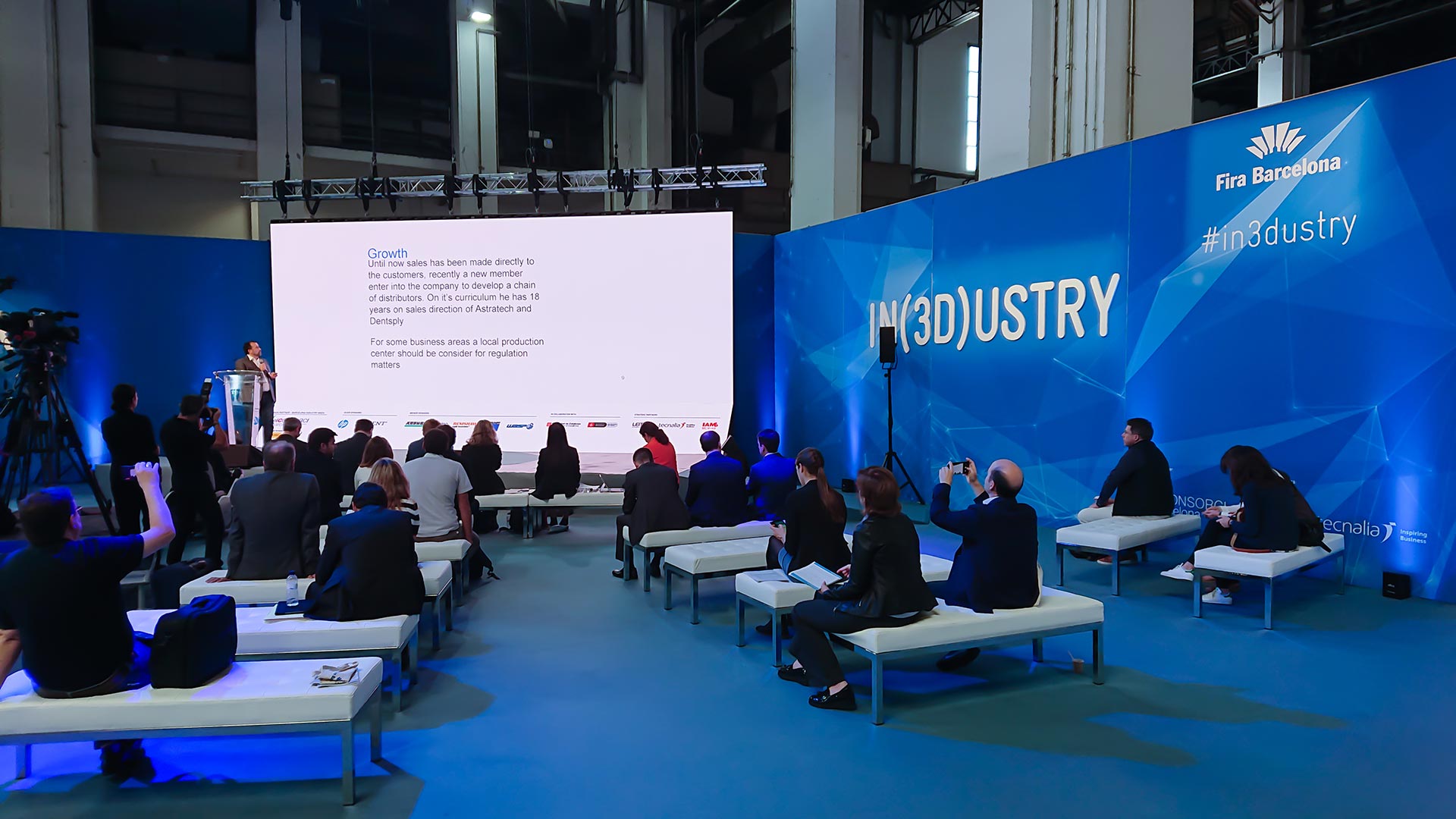 CLIENT: FIRA OF BARCELONA Project for the IN(3D)DUSTRY additive manufacturing congress which included designing and building auditoriums and meeting places as well as setting up the Sanitas venue in the Healthio exhibition area on innovation in healthcare.